Linda Rising defines a pattern as “a named strategy for solving a recurring problem”. The concept of patterns comes from the work of architect Christopher Alexander, who observes “Each pattern describes a problem that occurs over and over again in our environment and then describes the core of the solution to that problem in such a way that you can use this solution a million times over without ever doing it the same way twice.”

The key pattern introduced in continuous delivery is the deployment pipeline. This pattern emerged from several ThoughtWorks projects where we were struggling with complex, fragile, painful manual processes for preparing testing and production environments and deploying builds to them. We’d already worked to automate a significant amount of the regression and acceptance testing, but it was taking weeks to get builds to integrated environments for full regression testing, and our first deployment to production took an entire weekend.

We wanted to industrialize the process of taking changes from version control to production. Our goal was to make deployment to any environment a fully automated, scripted process that could be performed on demand in minutes (on the original project we got it down to less than an hour, which was a big deal for an enterprise system in 2005). We wanted to be able to configure testing and production environments purely from configuration files stored in version control. The apparatus we used to perform these tasks (usually in the form of a bunch of scripts in bash or ruby) became known as deployment pipelines, which Dan North, Chris Read and I wrote up in a paper presented at the Agile 2006 conference.

In the deployment pipeline pattern, every change in version control triggers a process (usually in a CI server) which creates deployable packages and runs automated unit tests and other validations such as static code analysis. This first step is optimized so that it takes only a few minutes to run. If this initial commit stage fails, the problem must be fixed immediately—nobody should check in more work on a broken commit stage. Every passing commit stage triggers the next step in the pipeline, which might consist of a more comprehensive set of automated tests. Versions of the software that pass all the automated tests can then be deployed on demand to further stages such as exploratory testing, performance testing, staging, and production, as shown below. 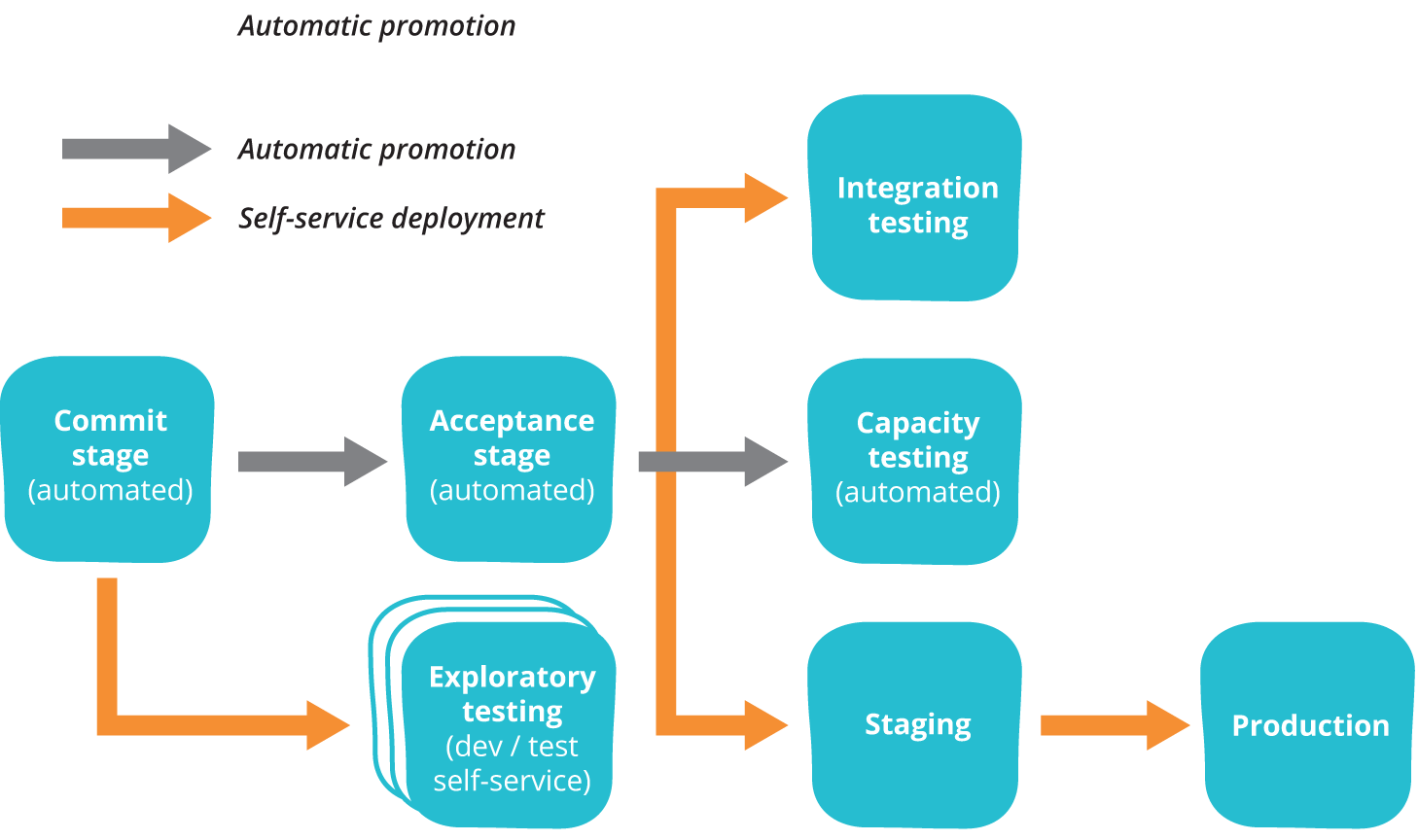 Deployment pipelines tie together configuration management, continuous integration and test and deployment automation in a holistic, powerful way that works to improve software quality, increase stability, and reduce the time and cost required to make incremental changes to software, whatever domain you’re operating in. When building a deployment pipeline, we’ve found the following practices valuable:

With the advent of infrastructure as code, it has became possible to use deployment pipelines to create a fully automated process for taking all kinds of changes—including database and infrastructure changes—from version control into production in a controlled, repeatable and auditable way. This pattern has also been successfully applied in the context of user-installed software (including apps), firmware, and mainframes. In The Practice of Cloud System Administration the resulting system is known as a software delivery platform.

Deployment pipelines are described at length in Chapter 5 of the Continuous Delivery book, which is available for free. I introduce them on this site in the context of continuous testing.

In the context of web-based systems there are a number of patterns that can be applied to further reduce the risk of deployments. Michael Nygard also describes a number of important software design patterns which are instrumental in creating resilient large-scale systems in his book Release It!

The four key principles that enable low-risk releases (along with many of the following patterns) are described in my article Four Principles of Low-Risk Software Releases. These principles are: